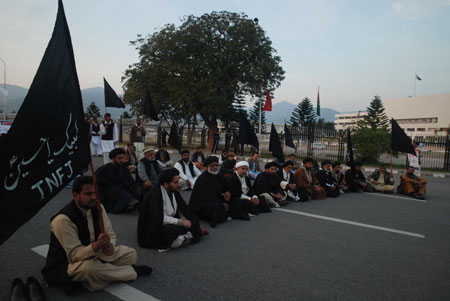 ISLAMABAD, February 18, 2013: The country-wide protest of Tehreek Nafaz Fiqh-e-Jafariya against Hazara Town Incident Quetta on the call of Quaid-i-Millat Jafariya Agha Syed Hamid Ali Shah Moosavi, the workers reached the Parliament House after breaking all hurdles in their way.

Dozens of Members of the Assembly including the Opposition leader Ch. Nisar Ali, MQM members, Riaz Fatiana, Nasir Ali Shah and Tahira Aurangzeb expressed solidarity with the demonstrators. The TNFJ workers vowed to continue their protest until the demands with reference to burial of Hazara Town Shuhada and their families are met.

The leaders of the Tehreek Nafaz Fiqh-e-Jafariya while addressing the protestors in front of the Parliament House demanded strict implementation of Anti-Terrorism Act; rooting out of black sheep present within the ranks of agencies and government institutions; crackdown against banned organisations working with new names, include elements opposing the Governor’s Rule and their patrons in investigation of Quetta incident. They said the banned organisations are included in the government and opposition alliances, the rulers and politicians should be merciful to the people.

Allama Qamar Haider Zaidi, Spokesman of the Tehreek Nafaz Fiqh-e-Jafariya in his address said those who are found in acts of terrorism should be dealt with several according to the law, the bereaved families should be given a patience hearing, arrangements should be made for the brining up of Shuhadas’ families, particular the orphans, and arrangements should be made for their education, employment while the demands of the Hazara community and their bereaved families should be fulfilled in line with their desire.

Hazrat Ali (A.S) and Hazrat Fatima is that greatest pair of the universe whose wedding ceremony was held on the sky before it being held on earth, Hamid Moosavi

Old News Tehreek Round Up

Old News Tehreek Round Up

Election Commission agrees to change the schedule of the local body elections during Chehlum Imam Hussain as on TNFJ demand – Tehreek Round Up (December 17, 2015 ~ December 03, 2015)

Shia Zakireen and Waizeen from all over the Pakistan expresses unwavering faith in the leadership of Quaid-i-Millat Jafariya Agha Syed Hamid Ali Shah Moosavi (February 13, 2015 ~ March 28, 2015)